Ross County passed their first test in the Scottish Premier League by holding an enterprising Motherwell side to a goalless draw.

Motherwell played the game on the front foot and at times justified their position as ‘the best of the rest’ from last season. Motherwell showed a balance of physical strength and searing pace on the flanks.

However, Motherwell were met by a stubborn, well organised Ross County side who were themselves not shy in playing attractive football when the opportunity arose. The defence of both teams won out, with neither goal-keeper being truly tested in the match.

Some tactical themes were apparent during the match and these are discussed below. The two teams lining up in 4-2-3-1 set-ups. The second picture illustrates the teams matching each other, with Murphy and Daley changing positions for Motherwell and Vigurs and Scott swapping for Ross County later in the first half.

For the second season in a row, Ross County began a league campaign with a  4-2-3-1 formation. Looking at the team lines, it was a surprise to see Richard Brittain and Iain Vigurs quite so high up the pitch in attacking phases, with Martin ‘Jimmy’ Scott playing ahead of Lawson and Duncan in midfield. Perhaps of greater surprise was the inclusion of Ross Tokely at right-back, ahead of new signings Kovacevic and Bateson.

Motherwell made one change to the team that narrowly lost at home to Panithinaikos in midweek, with Omar Daley replacing Henrik Ojaama. Daley started on the left of the band of ‘3’ but later switched with Murphy to play closer to Higdon up front.

While the two teams used the same system in a nominal sense, they were used in different ways. As always, a formation or system is entirely neutral; the distinguishing features are found in the manner in which it is used and by the players who use it.

Perhaps the biggest difference between the two teams was the type of players used in the respective bands of ‘3’, in the attacking-midfield section of the 4-2-3-1 formations. Motherwell effectively had three forwards in these positions, with Daley, Murphy and Humphrey all comfortable on the wing or coming inside. All three have the skillset of upper-SPL class wingers and remained high up the pitch throughout the match in support of centre-forward Higdon.

In contrast, Ross County used three natural central midfielders behind McMenamin. While all three are used to playing anywhere across the midfield (with Vigurs and Brittain particularly used to playing the wide positions in a deeper four-man midfield), they have the attributes of typical central midfielders rather than wingers. Their natural inclination might have been to sit deeper behind McMenamin, but they had to drop back to support County’s full-backs out in any event. 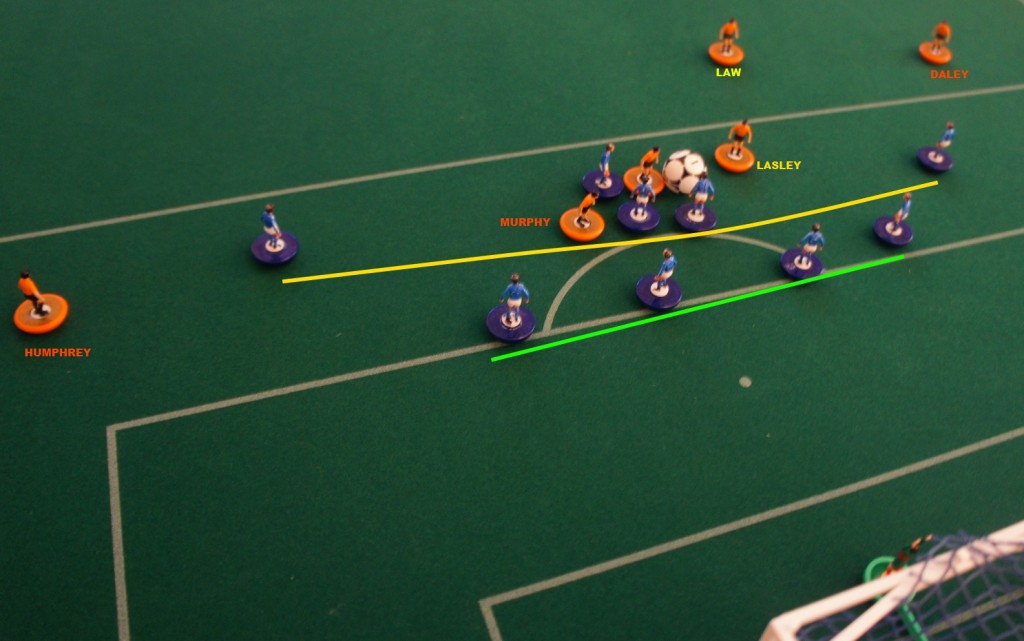 The lack of pace in Ross County’s full-back positions meant that Vigurs (later Scott) and Brittain had to support in defence to create two banks of four. This was done to some degree of success, with the defensive organisation carried forward from last season’s accomplishment, but it meant that all but McMenamin were defending close to County’s own 18 yard box. Motherwell’s full-backs were rarely troubled to the same extent.

With Richard Brittain having to defend so deep at times to help Tokely behind him, it meant that on occasion he found himself in a position where he could not start attacking moves. The inevitable clearance to a free Motherwell defender brought another turnover of possession and invited more pressure, of which County generally coped with competently.

2) Penetration on the flanks but resilience in defence

On paper, it was apparent that the match could have been won or lost on the flanks. Ross County’s main apparent weakness in the lack of pace at full-back contrasted alarmingly with the exceptional pace of Motherwell’s wide mifielders.

However, Motherwell never made the most of their advantage on the flanks. They rarely isolated or out-numbered County’s full-backs. When Motherwell did get to the bye-line, County’s centre-backs and goal-keeper managed the centred crosses with aplomb.

Ross County’s right-back took the sponsor’s man of the match award. County saw the best of Tokely in defence because of the diligence of Brittain in front of him, so that Tokely was not too often exposed to Daley or Murphy mano-a-mano. This meant that the majority of Tokely’s defending came from attacking crosses at the far post which were delivered from County’s left flank.

While Motherwell could not get behind Tokely, they had more joy attacking former Motherwell player Fitzpatrick. Most of Motherwell’s attacks started on the left and their most dangerous play arrived from a switch in play to Humphrey. Humphrey’s first touch let him down on more than one occasion.  He ought to have set up a number of goalscoring opportunities.

After the mid-way point of the first half, Motherwell swapped Daley with Murphy, presumably to allow Murphy to get a run at Tokely. Murphy never got behind Tokely until late into the second half, when Murphy’s cross was sliced into the crowd. 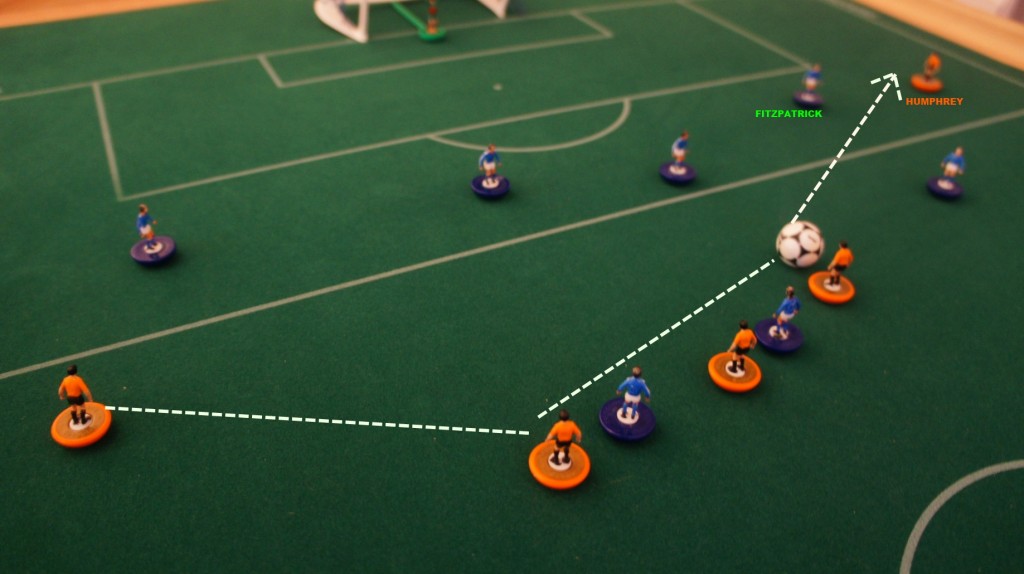 The switch in play exposed Fitzpatrick and the space around the left-back was so apparent because Vigurs’s positioning in front of him was more loose than Brittan’s on the other side. County swapped Vigurs with Scott in order that Scott could better protect Fitzpatrick from being caught in a 2v1 situation against Humphrey and Hately. Scott’s protection of the left-back was reminiscent of the difficult time that former County defender Scott Morrison faced against Willie Gibson for Dunfermline in 2010.

3) Ball-playing midfielders had the biggest influence for County

Motherwell almost always looked comfortable in possession until the point where they would attack County’s third of the pitch. Motherwell’s midfielders Law and particuarly Lasley could recycle possession among themselves and the defence. With County’s band of ‘3’ at least fifteen yards deeper than Motherwell’s equivalent, it meant that County’s striker McMenamin often found himself playing ‘piggy in the middle’ among the Motherwell players. It was further up the pitch that Motherwell lacked the assured touch, with their crossing failing to meet Higdon despite promising positions being taken up.

Ross County could not play out of defence in the same manner as Motherwell, for a couple of reasons. Firstly, Motherwell’s band of ‘3’ remained high up the pitch almost without exception, which meant that County’s full-backs could not collect from the goal-keeper. Secondly, County’s centre-backs would too often look down the pitch and would play a long pass towards McMenamin that was lost, rather than looking for Duncan or Lawson in midfield. 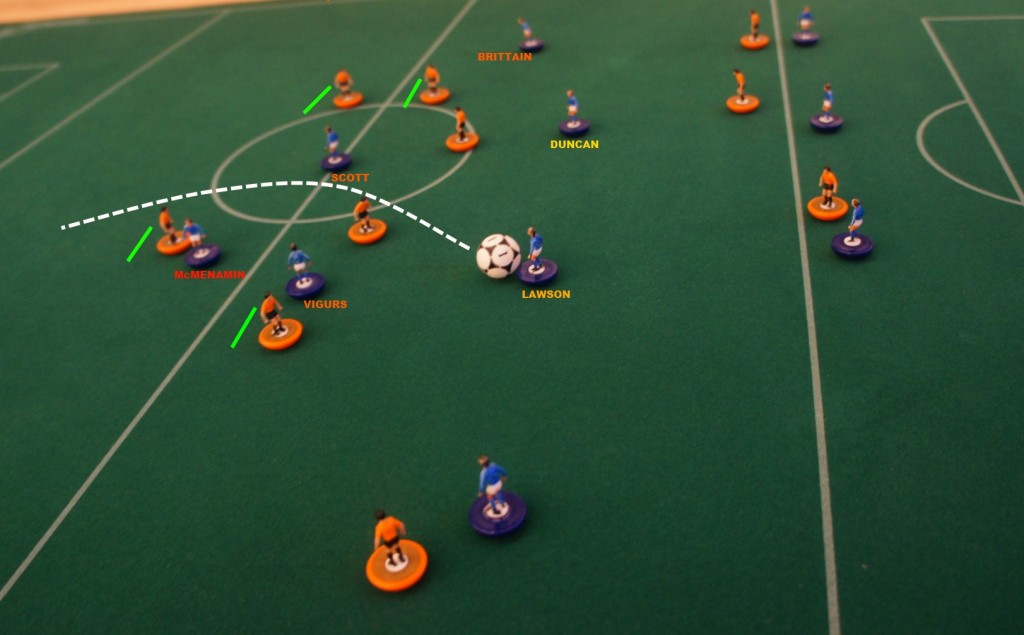 It took around quarter of the match to pass for the game to stretch enough to allow Lawson to begin to dictate County’s play. The home team’s best moments came when Lawson had the time to lift his head and combine with Vigurs. The two players combined well in making triangular passing moves with the other players, but no distinguishable chances were created in open play. County looked most dangerous from Vigurs’s set-pieces, with the height and strength of Munro and Tokely causing problems to Motherwell’s defence.

Brittain was not involved in the match in a creative sense as much as he would have liked. When County got forward, Brittain played high and wide against Hammell, but never had the beating of him. One surprise over-lap by Tokely in the second half brought some penetration from the right-hand side, but otherwise Brittain found himself cut off from the linking play among Vigurs, Lawson and Scott. Brittain deserves his place in the starting XI for countless reasons, but the wide-right position in a 4-2-3-1 does not best suit his style of play without a marauding right-back behind him. Gary Miller’s move to St Johnstone is notable to that extent, but there are other mobile full-backs in the squad that might bring the best out of Brittain in that position.

4) McMenamin’s isolation will be a problem throughout the season

Colin McMenamin was the top scorer in the First Division last season, but it will be a surprise to see him near among the SPL’s top scorers in this campaign. That is not a slight on McMenamin but a judgement on the circumstances. In this match, McMenamin was more than occasionally isolated against the Motherwell centre-backs due to how deep County’s midfield had to defend to protect the centre-backs.

McMenamin’s presence was in contrast to his opposite number 9 Higdon: 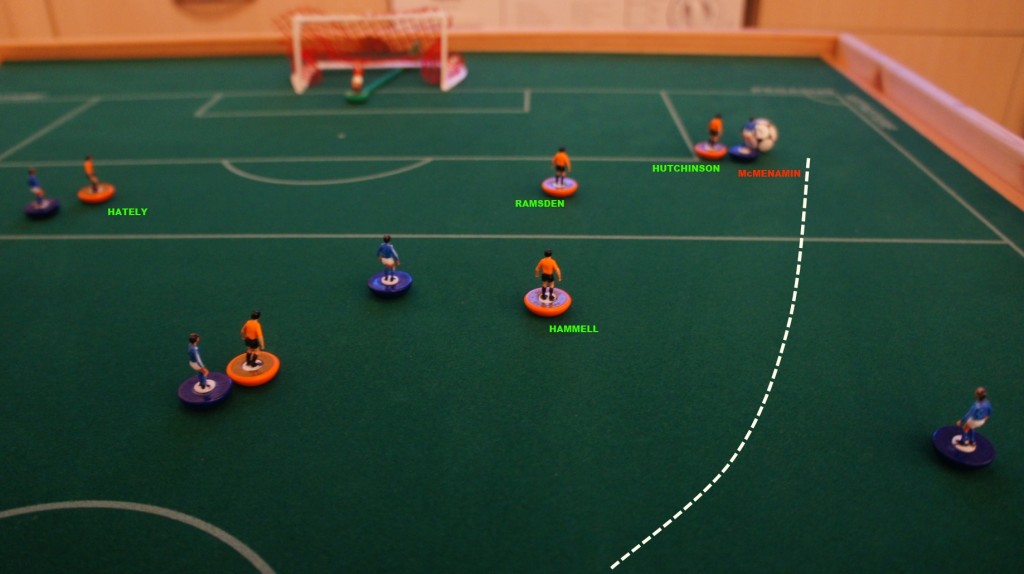 Ross County’s centre-forward’s play largely involved chasing balls into channels in an effort to bring his team’s attacking midfielders into possession.  McMenamin has always had clever movement and he occasionally showed the relative lack of mobility in Hutchinson and Ramsden by winning free-kicks in dangerous positions.

However, at least a handful of McMenamin’s goals last season arrived from cut-backs at the bye-line by County’s full-backs.  He might have to expect less of this in the future.

5) More time for Ojaama might have made the difference

At times in the match, Motherwell looked a very balanced and accomplished team.  They looked on the verge of scoring on a number of occasions, but either the final ball never arrived or the execution was not clinical.  Only once did they really get behind the County back-line (which was Murphy’s skewed cross late in the match) and only once was an odds-on chance created, when Higdon headed over from cross range following a deep cross from the right flank in the first half.

Perhaps the missing element to the team was a player to link the midfield to attack.  Motherwell started with three winger-type forwards behind Higdon in the band of ‘3’, but none were creative play-makers.  Henrik Ojaama is more of a striker than a play-maker, but his ability to draw players out of position and beat his marker in any area of the pitch (reminiscent of Uruguyan live-wire Luis Suarez) was missed earlier on. 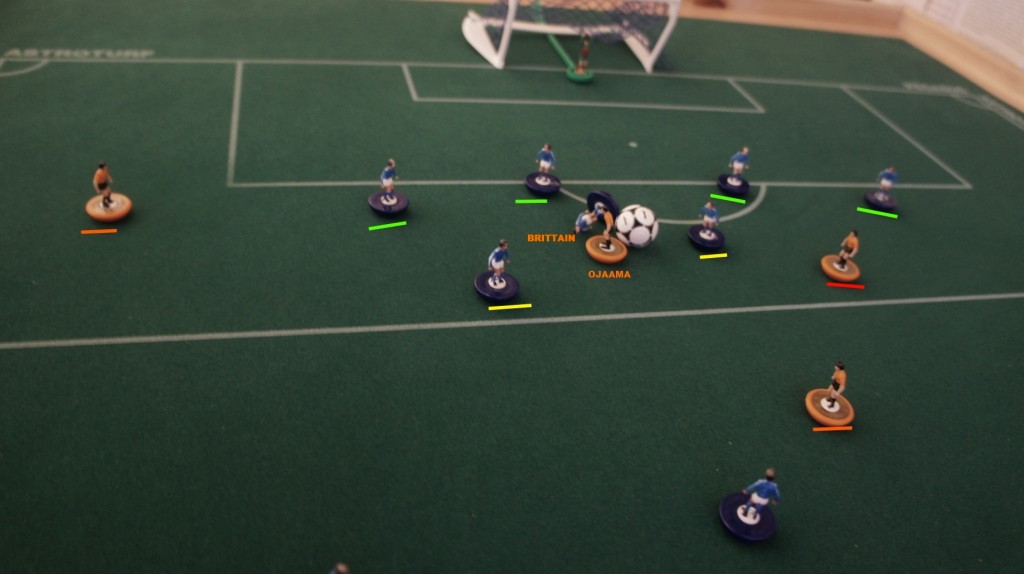 Ojaama had around twenty minutes on the pitch, playing behind Higdon and latterly on the left flank.  Ojaama did not make a telling contribution to the last phase of the match, but had he been given more time to link with Higdon and the wide players, he might have tipped the balance that could have given Motherwell three points.

Ross County generally defended strongly against a quick and skillful Motherwell side.  There is room for improvement from both sides.  A draw was a fair result based on the lack of obvious goal-scoring opportunities made by either team.  Motherwell’s strength on the wings brings a variety to their play but an apparent reliance on Ojaama to create and score could be a concern. Early signs show, though, that they could challenge for second place in the table.

Ross County, meanwhile, showed plenty promise in midfield from Vigurs and Lawson and a defensive resilience that should help avoid the damaging score-lines that Dunfermline suffered from last season.  However, Derek Adams’s Ross County sides have always relied upon their full-backs over-lapping and this will have to happen with more consistency if County are to create enough chancesto be safe from relegation through the season.