For the third home league match in succession, Ross County shared the points with their visitors.  In this particular match, Ross County looked more comfortable in possession than in previous league matches, which is an indication that they are beginning to settle in the league.  With almost identical match statistics, both teams probed for an opening but both teams lacked a focal point up front.  Rory McKenzie fashioned an excellent opportunity for himself late in the match by running at the defence and into the penalty box, but Michael Fraser saved the shot with his legs.  County did not create an equivalent match-winning chance, but were often close to scoring themselves.

Under pressure of time, this review will only cover one main theme: how the different formations cancelled each other out and how the midfield controlled the ebb and flow of the match. Ross County reverted to their stock 4-1-4-1 formation that has been used with qualified success against Celtic and Dundee.  That meant that there were another nine changes to the shocking 1-4 loss to Raith Rovers on Tuesday night.  Alex Cooper, one of the few fringe players not involved in the League Cup match, counted his blessings by not being tainted by association – Cooper started in his first competitive match in the senior side for County by replacing the injured Marc Corcoran on the left flank.

Kilmarnock were not at full strength, with Paul Heffernan, Gary Harkins and Cammy Bell absent among others.  Kilmarnock used a 4-2-3-1 formation throughout, with Borja Perez supporting Rory McKenzie up front for 75 minutes.

What was interesting in the match was the manner in which the centre of midfield matched up: Richard Brittain had Borja to contend with, while Stuart Kettlewell and Iain Vigurs pushed up against Liam Kelly and Manuel Pascali. 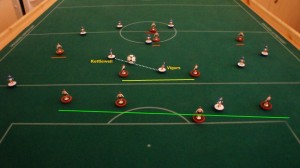 Of course, formations are entirely neutral and it is the application of the players within the systems that defines how attacking or defensive a team is.  Nevertheless, it is the tendency of the central midfield band of ‘2’ in a 4-2-3-1 to play a little more deep, compared to the midfield of a 4-4-2 formation (which is so often the default formation in Scottish football). That in itself gave Kettlewell and Vigurs some space to move forward and support Colin McMenamin higher up the pitch.  That put Pascali and Kelly under pressure at times and it meant that Kelly did not have as influential a match as perhaps might be expected of him. 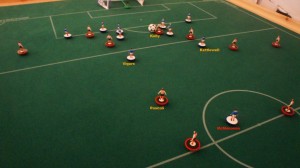 The corollary of that was that when Kelly and Pascali could get on the ball and bring Kilmarnock forward, it pinned Vigurs and Kettlewell back beside Brittain and left McMenamin isolated up front.

The other aspect of the midfield was where Brittain and Borja played. Borja received precious little of the ball in the first half, with him only being able to get behind Brittain to take a couple of shots from outside the box after 40 minutes.  In the second half, Borja’s influence gradually grew as the defences sat marginally deeper than in the first half, which gave an increase the corresponding midfield space.  On the whole, Brittain did an excellent job in stifling Borja and the Killie playmaker was substituted on 75 minutes.

A couple of other thoughts

1) McKenzie could have won the match.

Rory McKenzie does not have the same presence as Heffernan, but he ran at County’s defence with the ball and was very close to winning the match for the away team.  McKenzie could have had a penalty with a dribble into the ball between centre-back Boyd and right-back Tokely in the second half.  In the last ten minutes, McKenzie went on a similar run and managed to skip past Boyd but his shot was saved by Michael Fraser.  McKenzie was a handful and was more effective on his own than his counterpart McMenamin.

2) Playing out of defence is the way forward 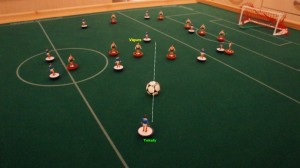 In the first half, Ross County enjoyed being able to play out of defence more so than in recent league matches.  It looks as if County have been working on their passing patterns around the full-back area and it has showed, with Ross Tokely in particular looking for a ground pass rather than the typical hoof.  It meant that possession of the ball did not turn over as quickly as in other matches and allowed County to build a move, rather than having to rely on a tackle or interception in midfield to counter-attack (as they did against Motherwell and to a lesser extent against Celtic).  With heavy rain meaning that Fraser was not willing to distribute to the defenders as freely in the second half, Kilmarnock had the opportunity to turn over the possession more readily – this was at least part of the reason why Kilmarnock were able to exert some pressure later in the match.

A draw was probably a fair result on the match statistics and general balance of play.  Both teams probably felt that they could have gone on to win the match but neither team exerted enough pressure to justify the three points.