Further critical analysis on other Celtic matches can be found at the consistently excellent tictactic.co.uk

This is the third time that Derek Adams and Neil Lennon have faced each other as managers.  Each contest has been captivating in its own right.

In this match, a typically stubborn Ross County side fought for their share of the points against a Celtic team who were protecting some of their injured players for a Champions League qualifier this coming midweek.  Ross County will be disappointed to drop two points after conceding the equalising goal at the very end of the match, but Celtic had more chances to score. The starting formations lining up and matching up.  As usual, the colour co-ordination in the Subbuteo illustrations are Green: Defenders (centre-backs or full-backs); Yellow midfielders and wing-backs; Orange for attacking midfielders; and Red for strikers.  While Celtic’s formation here is shown to be symmetrical, Izaguirre was typically much further forward than Matthews at wing-back.

With a number of attacking players (including Hooper and Forrest) not available, Neil Lennon started the match with a surprising 3-5-2 formation.  It was a surprise because Ross County were always likely to play with one striker, leaving at least one of Celtic’s three centre-backs redundant (assuming the general school of thought that in defence, there ought to be one more centre-back than corresponding centre-forward).

County did indeed play a variation of 4-5-1.  The surprise in County’s team was the inclusion of Corcoran on the left-wing, which freed up Vigurs to partner Kettlewell in the middle.  Rocco Quinn made his first start of the season on the right flank, as Brittain deputised for Lawson in the midfield-anchor role.  This 4-1-4-1 was not a surprise in itself, because it seems to be Derek Adams’s ‘big game’ stock formation, which was used in cup matches against SPL teams last season (including against Celtic last year and arguably against Celtic in the semi-final win in 2010).

Ross County’s style of play at the beginning of this season has generally been a reactionary one.  County’s back four and goal-keeper have started all three league matches and it is clear that they do not find it comfortable to beginning attacking moves from there.  Michael Fraser, the goal-keeper, rolled the ball out once to Fitzpatrick in this match but has otherwise punted every other collection of the ball into the opposition half. That has meant County relying on winning loose balls, tackles and interceptions higher up the pitch in order to re-gain possession of the ball.  That is the price paid for Tokely’s defensive strength and lack of technique at right-back.  County will become more progressive from defence through midfield as the season develops, but the conservative strategy has worked thus far.

Celtic took the run of play to County for the most part, which was expected and can be illustrated by the match statistics.  However, Celtic rarely managed to break County down to the extent that they looked very likely to score and it took a different type of reaction for Celtic to recover a point from the match.  Lennon ended up using three different formations by the end of the match to get the necessary goal, which was probably a necessary move as Celtic were lacking ideas in attack by the last quarter of the match.  It took a wide, ultra-attacking 4-4-2 formation at the end of the match to consistently get behind County’s defence at left-back, which was from where the equalising goal was scored.

2) The spare men in midfield

Celtic’s deep-lying midfielder Wanyama was nominally one of Celtic’s ‘spare men’ on the pitch (along with the redundant centre-back), with no direct marker when the sides matched up.  This meant thathe ought to have been able to recycle possession trouble-free.  In practice this did not always happen, because Kayal would push further up the pitch from Wanyama and Ledley, generally leaving a 2v2 scenario in central midfield.  Lennon could be heard from the dug-out calling for more urgency from his midfield. 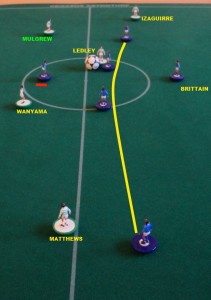 Celtic were more tidy in possession than County, as anticipated, but they did not dominate the midfield the way that they would have liked.  Vigurs and particularly Kettlewell are known for their tenacity and they rarely let Celtic play through the middle of the pitch; Celtic relied on getting forward by involving their wing-backs and by diagonal balls towards Samaras.  Wanyama and Ledley generally did a decent job in recycling possession (helped by the fact that Celtic had one extra defender to play the short game from defence), but they always looked vulnerable to the midfield press which would occasionally expose their centre-backs.

In contrast, Brittain sat between Ross County’s defence and midfield and was, for the most part, County’s un-marked player on the pitch.  The Ross County captain and sponsors’ man of the match reprised his role against Celtic in 2010 by passing through midfield when he could and by intercepting any passes that were attempted by to the feet of Samaras and others in Ross County’s centre-back zone. 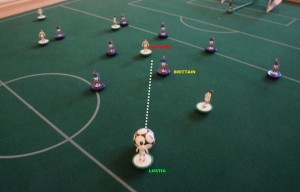 The picture immediately above shows Celtic’s ‘redundant’ centre-back Mikael Lustig try to play out of defence towards Samaras. Brittain was positioned perfectly to intercept and begin an attacking move for County.  This was not an exclusive moment in the match, with Brittain, Vigurs and Kettlewell dispossessing Commons on a number of occasions when he found himself around the inside-forward position.

As Brittain was County’s free midfielder, he often had time to pick a pass.  County’s progression from full-back was missed to this extent, because neither Fitzpatrick nor Tokely wanted to over-commit with the threat of Commons and Samaras in the channels behind (although it should be noted that Fitzpatrick delivered a couple of dangerous first-time crosses in the opening half hour of the match).  Earlier this year, County’s full-backs would break beyond the opposition defence to create chances for McMenamin up front, but the attacking ambition has recently been sacrificed for defensive assurance. 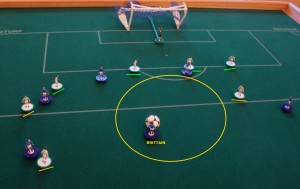 Both Brittain and Wanyama had opportunities to shoot by advancing from deep midfield.  Wanyama’s long-range shooting left something to be desired, but Brittain scored with an exceptional free-kick and later hit the crossbar from range.

3) Penetration had to come around County’s defence

Celtic’s best opportunities would arrive from possession on the flanks and the ability to play beyond County’s full-backs. 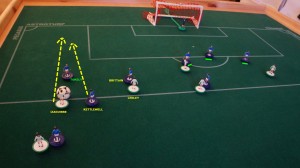 In theory, the match-up between Izaguirre and Tokely on Celtic’s left side looked to be the more likely contest where Celtic would create an opening.  In fact, Izaguirre managed to get to the bye-line on a number of occasions, but his delivery rarely found its target Samaras at the far post.

Celtic’s best chance from open play – apart from the goal that Commons scored – arrived from a long diagonal ball from Mulgrew towards Samaras, who knocked the ball down.  Commons’s close-range shot was saved when through on goal.

With no James Forrest on the right flank, Celtic missed the same kind of attacking threat on the right (until later changing to a 4-4-2).  Matthews was superb defensively – County’s left-winger Corcoran had a quiet game – but the right-wing-back never got to the bye-line in the same manner as Izaguirre. It took Kayal to make outside-right runs to stretch that part of the playing area.

Ross County’s best open-play opportunities also arrived from the left flank, when Fitzpatrick and/or Vigurs would combine with Corcoran to get 2v1 against Matthews.  County still require an equivalent threat from the right, which is missed since previous right-back Miller’s departure to St Johnstone.  Having the touch and technique from Vigurs to compliment Kettlewell’s late runs into the box might make up for Gardyne’s linking play between midfield and McMenamin, but the ability to genuinely stretch the play on the right flanks looks to be a missing ingredient towards scoring from open play.

4) One overload too many

With Brittain having put Ross County ahead shortly into the second half and with Celtic still using three at the back against one striker, the onus was on Lennon to change his team to get a result. After 64 minutes, Celtic took the ineffective Lustig off to introduce Tony Watt.  Celtic put Wanyama in defence to keep three centre-backs, but dropped Commons to a deeper position within a 3-4-1-2 formation. Little seemed to change with the formation match-ups, other than Commons now directly fell into Brittain’s territory.  Commons had licence to drift to either flank to find space, as he typically does, but Brittain did not wish to allow him any time to shoot or create from outside the box. With 13 minutes of regulation time remaining, Celtic sacrificed Wilson at the back to change to a 4-4-2 formation.  Slane was introduced on the left wing to no great effect, with Commons drifting inwards from the right (and Watt outwards from the centre).

With the extra width, Celtic began exerting a lot of pressure, with shots being blocked inside the penalty box and successive corner kicks being earned.

At that point in the match, with County’s back four defending so narrow,  extra diligence was required from County’s midfield to keep the defence protected in the middle and on the flanks. 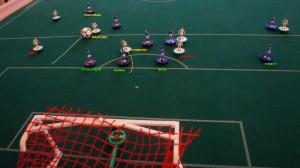 However, the equaliser arrived from space found outside County’s left-back.  Wanyama found the space to play a pass to the over-lapping Watt in the last moment of the match.  Fitzpatrick was tucked in to support the centre-backs who were being overloaded by Wanyama (who at that point was a roaming centre-back), Commons and Samaras. Fitzpatrick’s left-flank parter Corcoran was lost further up the pitch in an effort to support McMenamin.  Corcoran’s position seems to have been a strategic decision by Adams to help County retain the ball on the counter, but it meant that County’s defence on the left side was exposed.  Watt’s strongly-struck shot from the right side of the box was saved by Fraser but the ball rebounded to Commons to tap in.

On the whole, County’s midfield was more balanced than Celtic’s.  Ledley, Kayal and Wanyama all looked to play a similar kind of role. This contrasted with County’s midfield three, where Brittain was the influential deep midfielder behind the thrust of Kettlewell and touch of Vigurs.

Lennon’s tactical reactions eventually recovered the situation. It could be that Adams’s loyalty to the same XI throughout the 94 minutes contributed to the equaliser being conceded.

A draw was a fair result at the end, with Celtic being wasteful with their opportunities in front of County’s goal against an exceptional Ross County defence. Both teams had good chances to score at least another goal and both were unlucky to hit the woodwork.