Colour coding in the annotated pictures is, as usual:

Ross County ended up winning quite comfortably, in difficult circumstances for all the players on the pitch.

Partick Thistle paid for losing the coin toss and having to play into a strong wind in the first half. Ross County used the wind to pin Thistle back and went into half-time with an advantage.  However, it was not all down to the wind.  Ross County tried to play the ball along the grass when they could, attacked with the width of the pitch to keep Thistle’s wing-backs pegged back and made the evening uncomfortable for Thistle’s centre-backs with late runs from midfield.

In the second half, Partick Thistle managed to put some pressure on County, but had to resort to shots from outside the box that Michael Fraser saved.  Ross County counter-attacked well against the wind and Steven Craig might have had a hat-trick on another evening, despite having little more than ten minutes on the park. 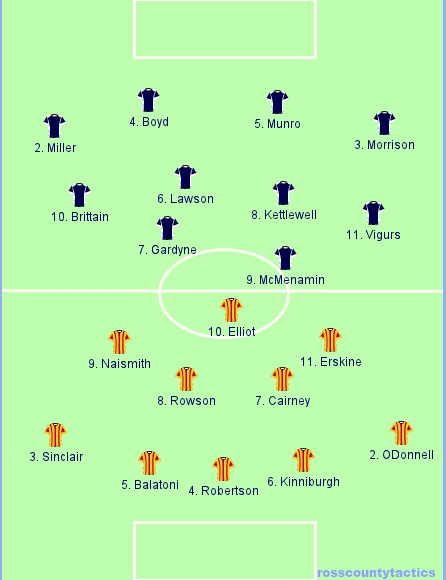 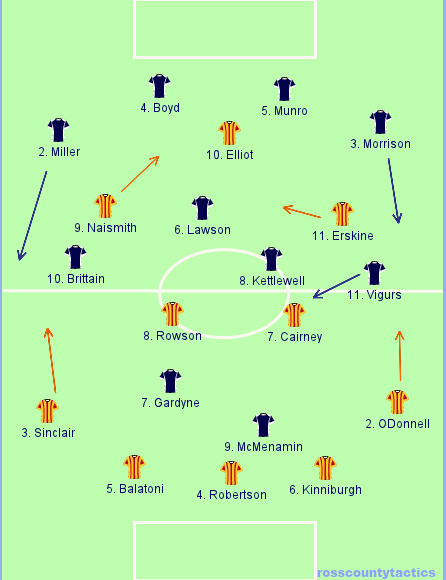 Ross County lined up as expected in our preview of the match, published yesterday.

Partick Thistle were close to our predicted line-up, but for a couple of necessary changes that were due to injury.  Archibald was replaced by Kinniburgh at centre-back, while on-loan Naismith replaced Doolan up front.

The slight surprise to the site was the tweak in the formation.  Thistle used an interesting formation in the first half.  It could be called a 3-4-3 with wing-backs, or a 3-4-2-1, but it most closely resembled a 5-4-1 when defending.

It could not be said that Partick Thistle intended to play with an inherently defensive set-up.  A formation is entirely neutral; it is the players within it and the approach taken that matters.

Thistle’s early intent was shown quite clearly, with how far up the pitch their wing-backs were.

In the picture above, all of the defenders from both teams are highlighted in green.

With Thistle having three centre-backs and Ross County two forwards, Thistle were in theory comfortable with a 3v2 advantage in their own defence. That would, in theory allow Sinclair and O’Donnell to get forward for Thistle. When they got forward in unison, it did stretch the County defence, who also had to contend with Erskine and Naismith on either side of central striker Christie.

However, it wasn’t very often that Thistle managed to get their wing-backs forward together. That was down to a) The strong wind keeping the ball in Thistle’s half to some extent (but it wasn’t a deciding factor on its own), and b) how well Ross County utilised their own full-backs.

Ross County made excellent use of their full-backs all evening.

This site’s preview of the match asked the question as to how County would get their full-backs forward, and if they did how could they afford to have both attacking together.

One reason why Ross County subdued Thistle’s wing-backs and got their own full-backs in attacking play so often, was because Thistle only had one ‘proper’ forward in Christie. Naismith and Erskine fell back when Thistle didn’t have the ball. In addition Naismith and Erskine defended quite narrow, so that meant that County’s full-backs had space to move into.

The illustration above shows that by the time Erskine had closed Morrison down, County’s left-back had advanced with the ball and another passing option had opened up.

Ross County used both full-backs effectively. The key part to that was Lawson’s role in the centre of the park, switching play from side to side well. There were clear instructions from the dug-out, with County’s management encouraging their players to play balls across the park as often as possible.

It was the repeated stretching of the pitch that brought about Ross County’s goal. This picture highlights the space that Miller found at times. With the play starting on the left-hand side, Thistle left wing-back Sinclair was defending the far post, but after the switch in play he was too far away to stop Miller advancing. It was Miller who crossed for McMenamin’s headed goal, to open the scoring, after Miller was played into a good position by Brittain on the flank. Vigurs then scored a second goal, direct from a free-kick, by curling a shot into the far corner, with the shot given added velocity by the wind.

It took until the second half for Partick Thistle to get a shot on target.

Kai Naismith showed occasional trickery on the ball (and a capacity to fall to the ground with surprising regularity, for such a strong looking player). He also won his fair share of aerial duels, particularly from long diagonal balls. However, his strike partner Elliot was never sharp enough to make the most of them, with Scott Boyd reading the play typically well.

Erksine found himself frustrated for most of the first half, defending on the back foot and not finding space to run with the ball. He didn’t help himself by going so central. His heroics against Hamilton were not to be repeated, against a well-drilled Ross County midfield (who are still unbeaten when starting together this season).

There was one instance where Erskine did find himself with the space to dribble in to that he craved, from a counter-attack. In that instance, County had recovered by the time that the football was laid off for Elliot and Lawson got in a challenge.

Meanwhile, Ross County looked good going forward when they were able to isolate one of the three Thistle centre-backs. Michael Gardyne put in a man-of-the-match display, dropping deep off the Thistle defence to collect the ball and run at and beyond them. This picture illustrates that a three-centre-back system can sometimes be made redundant against a player like Gardyne. Only Balatoni had a player (McMenamin) to mark; Robertson and Kinniburgh were covering. It typically only takes one spare player to cover. Robertson’s extra insurance in defence meant a shortfall in numbers elsewhere (and with the way these formations matched up, that was in County’s full-back positions and/or in front of County’s defence, where Lawson played). 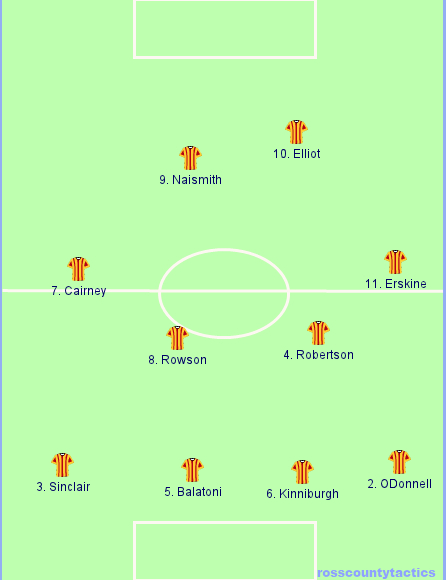 Thistle formation in the second half. Robertson dropped back into defence later after substitutions, but the 4-4-2 remained

The second half did play out differently to the first.

Partick Thistle changed their formation from the start of the second half, with Robertson stepping out of defence and partnering Rowson in midfield. There are few teams that can change from a two centre-back system after playing three in this league as well as Thistle.

There were times in the second half where Thistle played on the front foot. That was helped in part by the wind and County ‘keeper Fraser’s kicking not reaching far. It was also helped by Thistle reverting to a flat 4-4-2 and using more width going forward.

However, for the most part, Ross County defended diligently, using two compact banks of four. Partick Thistle applied pressure from a succession of corner kicks on top of Fraser, but Ross County coped.

In the end, the result of Thistle’s pressure resulted in four good shots, all of which were outside the penalty area. Fraser saved all four: three of which quite comfortably; the other superbly.

Ross County threatened to score until the end of the match. Gardyne was a constant menace in the game, stretching the defence with his dribbling. He and McMenamin dove-tailed well for the duration, but were supported by Vigurs’s flair and Kettlewell’s late runs into the box. McMenamin’s substitute Craig missed three chances, including two open goals, in a way that only he could after doing the hard work with his off-the-ball running.

Ross County made the better use of their wide defenders in getting forward. They had less players starting in Partick Thistle’s defensive third of the pitch, but a combination of late running from midfield and clever link-up play from Gardyne and McMenamin ensured that Ross County took the points from the match.

Partick Thistle tried to compete throughout the game, but with Erskine struggling to make an impact and the other Thistle midfielders out-matched, it was an uphill battle. They still have the players to mount a credible challenge to Dundee and Falkirk as being ‘the best of the rest’, but their away form will have to improve considerably during the last third of the season.