The Erskine Conundrum: a preview to the Partick Thistle Match

You will have seen the recent post on this blog, plugging our interview with the Jagscast.

During that interview, a question was asked as to how Ross County should stop Chris Erksine on Tuesday night, when County host Partick Thistle. Erksine is in form just now and can change the outcome of a match almost by himself.

It was suggested that Ross County would cope quite well if Erskine played ‘in the hole’ behind the Thistle forwards Elliot and Doolan, as he did on Saturday at home to Hamilton (Thistle won 2-0). County kept Erskine quiet in the 1-0 victory at Firhill in December.

With further thought, it might not be that straightforward.

The rest of this article is based on the presumption that Thistle will use the 3-4-1-2/3-5-2 formation that was shown against Hamilton. This is the team that started against Hamilton. There is every chance that the same team will start on Tuesday night, having won comfortably against Hamilton.  Doolan was taken off early on, so he could be replaced by Stewart.

Some thoughts on that team:

From a Ross County perspective, there is cause for concern as to how that Thistle team would match up to County’s classic 4-4-1-1: 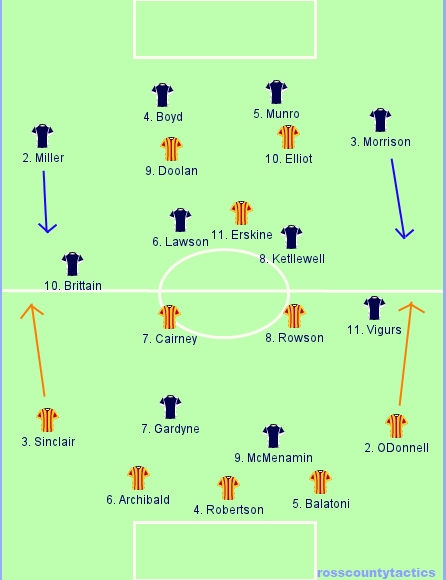 There are a number of issues to think about:

Going back to point 2, Thistle could easily dominate with the 3v2 numerical advantage in midfield.  Ross County have been known to struggle in the past, when Lawson and Kettlewell are outnumbered. 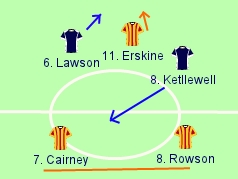 The problem is exacerbated by Erskine’s erratic movement.  Paul Lawson, normally the deeper-lying of the two midfielders, will feel obliged to sit in front of the centre-backs.  That could leave Kettlewell fighting a losing cause.

Ross County could therefore adjust quite quickly to a diamond-shape, or 4-1-3-2 formation.  Lawson would sit off the rest of the midfield, reducing Erskine’s space to play in, while County’s midfielders would out-number Cairney and Rowson.

It wouldn’t be pretty, but it would probably ensure County dominated possession.

The disadvantage for Ross County having a more narrow midfield would be the space available to Thistle’s wing-backs to get forward.  County could probably only afford to engage one full-back forward at a time, to maintain a 3v2 advantage in defence, but Thistle would have free reign to get Sinclair and O’Donnell involved high up the pitch.

One possibility for Derek Adams to think about is to use an option utilised at the end of the recent win at home to Queen of the South. 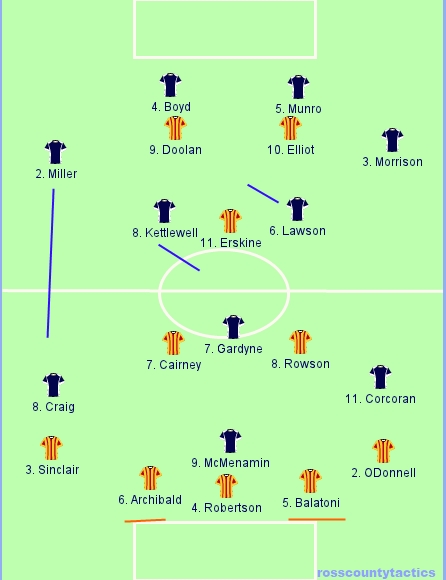 Playing a 4-2-3-1  formation might be a good option on Tuesday night:

Of all of the possible scenarios anticipated, the outcome of the fixture will surely depend on:

It could be a fascinating contest.

One Response to The Erskine Conundrum: a preview to the Partick Thistle Match