For more reading on Stenhousemuir FC, do have a look at Craig Telfer’s Who The Hell Is Akabusi? blog

Statistics can only tell some of the story of the match.

Stenhousemuir were easily beaten by the the stronger team, in terms of strength, fitness and footballing ability, as most spectators might suspect when teams from different league divisions compete.

However, the difference in quality was exacerbated by some tactical floundering on Stenhousemuir’s part.  The truly unorthodox 3-1-4-1-1 formation might have been the result of a number of Stenhousemuir players being unavailable, but it is clear that the experiment did not work.  Ross County were tactically superior in every area of the pitch, even before the sending off early in the second half killed the contest. Ross County lined up with their typical 4-4-1-1 formation.  The only surprise to the team was the inclusion of Steven Craig in place of Colin McMenamin, who didn’t make the match-day squad at all.

Stenhousemuir, who under manager Davie Irons normally play a traditional 4-4-2 system, lined up with an unconventional 3-1-4-1-1 formation.  Ex-Morton striker Stewart Kean led the line, with Paul McHale playing as the supporting attacking midfielder.  A back three, including ex-County player McKinlay, were helped out by another ex-County defender Corrigan, who sat in front of the defence.  The Warriors had natural wingers Campbell and Dickson as wing-backs.

This match analysis will largely concentrate on how Stenny’s starting formation didn’t suit the circumstances, which contributed in some poor individual performances.

THREE AT THE BACK

While only two goals out of the seven were scored when Stenhousemuir played with three at the back, most of the damage was done in that period of time.

There are at least a couple of reasons why the three at the back system didn’t work against County:-

Ross County played a 4-4-1-1 formation.  Michael Gardyne often plays as a second striker, or a deep-lying forward, but he is a player that naturally likes to collect the ball from deep and run at defenders, drawing them out of position before playing the pass.

When Gardyne dropped off, that left Steven Craig up front on his own for County.  Three centre-backs marking one forward means that there is one defender doing nothing.  Indeed, the picture above shows County’s forwards more deep than usual and all three forwards had no-one to mark.

Three-at-the-back systems are typically used to have one spare defender to cover, with two marking.  When Gardyne pushed up, as the picture directly above illustrates, then the defending system appeared to work, with extra protection from Martyn Corrigan in front of them.

However, the system didn’t always work.  The fluid off-the-ball movement by Garydne, and Iain Vigurs drifting all over the park from the left flank, caused real problems to the Warriors’ defence.

If the team strategy is to contain the other team and stop the opposition from scoring, then there is little wrong with having two spare centre-backs. However, with attacking wing-backs and a relatively high defensive line at times, the overall strategy wasn’t obvious.

2) – A lack of protection and positional discipline

The Warriors’ back three were pulled and stretched all over the park.  A back three should never have so much space among them as illustrated above.

Kevin McKinlay, in particular, had a very poor game at left-centre-back.  He was directly culpable for a number of goals, from lazy positioning to careless passing, but there were a variety of other chances that were made from him not getting on the defending goal side of whom he was marking.

Ross McMillan, the most central of the three defenders, was one of the few Stenny players to leave with any credit.  It was unfortunate for him to get sent off, because he didn’t play badly at all in the circumstances. McMillan was exposed to the foul because he was dragged over to cover for McKinlay, who was inexcusably out of position for a centre-back.

It could be argued that the back three weren’t helped by the lack of protection on the flanks.  Young loanee Jamie Campbell persevered at right-wing-back, but it wasn’t a position that he would have had much experience in.  Dickson, on the left, often let his marker run beyond him, which didn’t help McKinlay’s defending.

Ross County played on the positional indecision.  Vigurs was clever enough to stay wide on occasion, to stretch the Stenhousemuir defence towards him.  When Vigurs didn’t attack down that side, the over-lapping Scott Morrison did (NB: Morrison had played a very accomplished game and is clearly growing in confidence with a run of matches).  When neither of those two did, Steven Craig would pull to the left to play on the shoulder of the last defender.

This meant that Stenhousemuir were always susceptible to the early switch in play from the other flank, which pulled the defence out of position.

Stenhousemuir didn’t offer much in attack during the match, but did look most threatening when Campbell got behind Morrison a couple of times in the first half.  Campbell could have done a lot better in possession of the ball in general; he gave away cheap possession on a number of occasions, putting Ross County on the counter-attack.

One area where Stenhousemuir’s formation ought to have suited them was in midfield.  There was a midfield diamond of four players, who were in turn flanked by the wing-backs.

On occasion when the County defence fell back to hold a deep line, Stenhousemuir looked tidy on the ball in the middle third of the pitch.  The numerical advantage in the centre gave them passing triangles.  They were not adverse to switching the play to the opposite wing-back, to try to stretch County’s own defence to find any gaps for Kean to find.

However, as the final third was approached, Lawson often did an excellent job in sitting in front of the centre-backs, blocking off the pass to chief play-maker Paul McHale.

At other times, with County holding a higher line, the Stenhousemuir holding midfielder Corrigan was hounded by Gardyne and Kettlewell on the ball.  This picture illustrates Brown Ferguson being pressed by Kettlewell, very high up the pitch for two midfielders, but it was Corrigan who received most of the same kind of attention.

In defence, it didn’t matter how many midfielders were present, when Iain Vigurs was in such imperious form.

Stewart Kean had a difficult day, playing as the lone striker against most probably the best central defence outside the SPL.  He was never going to win any long balls against Boyd and Munro.

He was supported by Paul McHale, who had an interesting game.

McHale occasionally found himself in a pocket of space behind Lawson and in front of the County defence.  It only happened a couple of times, and his final ball failed him, but McHale’s showing was the one bit of class in the Stenhousemuir performance.  He had been out with a long-term injury, but he would be a serious threat to any team in the Second Division, in the hole behind Kean in a 4-4-1-1 formation.

Ross McMillan was sent off on 51 minutes and six goals were scored thereafter.  It might seem surprising that this blog isn’t covering most of the rest of the match, but there was little tactical interest.

Stenhousemuir sat back with a 4-4-1 formation for five minutes, which left Stewart Kean even more isolated up front, but it did mean that there were two compact banks of four protecting Alistair Brown’s goal. 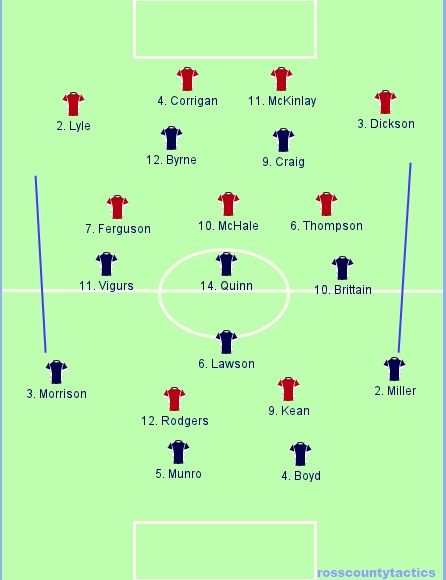 However, Davie Irons wanted a little more support for Kean and introduced Rodgers in a 4-3-2 formation.  It was probably felt that 0-2 was still a score-line that could be recovered, but losing the extra midfielder cost Stenhousemuir.

County were able to exploit the flanks with their over-lapping, attacking full-backs.  Dickson particularly had a difficult end to the match, against County’s Gary Miller who often relishes open space to run into late in matches.  County were able to over-load Stenhousemuir’s midfield, putting unsustainable pressure on the defence and County might have scored ten goals in the second half with the chances created.

While the result might not have been in much doubt from the first half performance, Stenhousemuir’s red card killed the match as a contest.

Stenny’s unorthodox formation didn’t help their cause, because the three central defenders never looked comfortable in dealing with County’s running from deep areas.  The incessant pressure in the second half resulted in defensive mistakes and County were ruthless in finishing the chances available.

Highlights of the match can be found on the BBC Sport site for a short time after the match.