This Saturday 16 December 2011 should see two in-form teams meet each other at Victoria Park.

Ross County have won their last ten matches, since losing to Celtic in the League Cup on 21 September 2011. They are unbeaten in the league since their only defeat, away to Hamilton Academical on 13 August.

Dundee have won their last six matches, since losing at home to Partick Thistle on 29 October.

The two clubs will be able to field close to their first-choice teams. However, those unavailable from the last matches will be missed to some extent.

Ross County are likely to start with the similar 4-4-1-1 shape that has brought recent success.

There are two main absentees for Ross County. Marc Fitzpatrick is likely to miss out at left-back, after injuring his knee in County’s last competitive match against Raith Rovers. County’s captain and right-midfielder Brittain is suspended from collecting six yellow cards. The suspension would have been served against Ayr United in the past weekend, but that match was postponed.

Dundee‘s on-form right-winger Nicky Riley is Dundee’s only main absentee from recent weeks. How to replace him will be Dundee manager Barry Smith’s biggest concern. 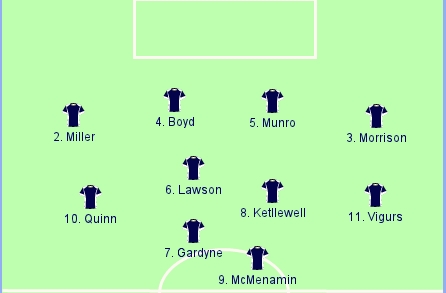 The suggested selection for Ross County is made on the presumption that County manager Derek Adams will want to cause as little disruption as possible to the side. 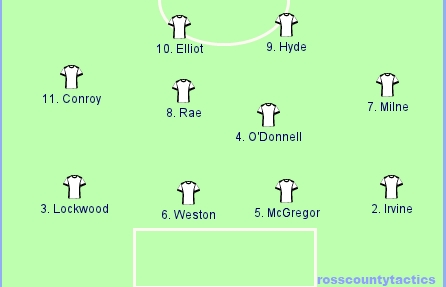 Dundee have less necessary changes to consider. However, having Riley absent is arguably more important to them than County losing Fitzpatrick and Brittain, as well as those two players have done this season.

WHAT TO LOOK OUT FOR

On the face of it, County and Dundee look as if they will approach the match in a similar fashion.  It is surprising to see how similar they are, on paper.

One difference in the approach of the two teams will be County’s use of Gardyne, between the lines of Dundee’s midfield and defence.  While County are in possession, Gardyne will link up with McMenamin and others around Dundee’s penalty box.  However, when Dundee are in control of the ball in County’s half, Gardyne will likely drop deep and wait for the ball to come to him for the counter-attack.  Hyde and Elliot will probably play closer to each other, which will keep both County centre-backs occupied.

WHO TO LOOK OUT FOR

With two in-form teams set up similarly, Saturday should bring a fascinating match to watch. Each teams will probably have spells of controlling the match, but given the strength of the respective defences, counter-attacks might bring the best chance of a goal in open play.